In the United States, cricket is slowly but surely taking off. Though not quite as popular as it is in India, Australia or England, leagues such as American College Cricket (ACC) have been on the rise. Populous centers, such as New York, now have over 100 teams across 4 different state leagues.

With the advent of American College Cricket in 2009, over 70 colleges, including Harvard, have developed teams. Since cricket fields are not as numerous as clubs, a problem arises: where will all these teams play? Some teams in the ACC opted to play on field hockey fields with a long straight boundary and short square ones. Though Harvard played on the local Jordan Field Hockey field for a few years, we decided last year to look for a better option that could give the team a more authentic cricketing experience. Since building a full cricket field is expensive, we decided to look into drop in or roll out pitches in order to convert any field into a cricket field.

The search for a cheap, good surface to play cricket on led the team to the new 2G Flicx Pitch technology from Flicx UK. Initially, we were skeptical – could a synthetic roll out pitch really behave like a true turf wicket? After talking to a few other local players with experience with Flicx, the team decided to give it a shot. With the help of Mahindra USA, one of the Harvard Cricket Club’s sponsors, we purchased a 2G Flicx wicket. This was one of the best decisions the Club has made to date. After an initially period of up and down bounce in the first few games, we realized that if we rolled the pitch for just 15 minutes before the game, the bounce became even, consistent and true. Furthermore, it did not slip when attached to either synthetic of grass surfaces.

We now play most of our games on the  2G Flicx pitch and are able to experience cricket as it should be – on a true ground with a true pitch. This experience has helped us improve tremendously over other local teams in the area. Currently ranked third in the nation, the Harvard Cricket Club now heads to the collegiate cricket nationals in March as one of the favourites to win the tournament.

Flicx UK would like to thank Manik Kuchroo, President and Captain of the Harvard Cricket Club for writing this blog for us – you can find more information about his team via their facebook page https://www.facebook.com/HarvardCricketClub or website www.harvardcricket.org

Flicx UK has today confirmed that it will be returning to the Cricket Club Expo series of events in early 2015 which will enable clubs to see and test out the new 2G Flicx Pitch range, which launched at the same events in 2014. The three shows will take place at Lords (7th Feb),  the Newcastle Cricket Centre, home of South Northumberland Cricket Club the North East ECB Premier League Champions (21st Feb)  and finally the SWALEC Stadium in Cardiff (7th Mar).

The new 2G product range from Flicx UK has received exceptionally positive reviews in its first year, with significant performance improvements from its predecessor including being less slippery in wet conditions, softer and easier to roll out and with case history of applications on top of a wide range of surfaces. It is also now UK made which has reduced the lead times considerably whilst prices are held for 2015. 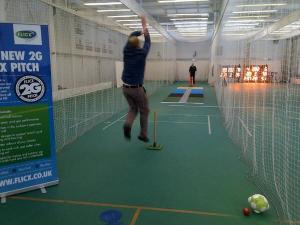 Suitable for both hand and soft ball cricket and with improved seam and spin performance, the Flicx Pitch comes in a range of colours and designs including great coaching pitches plus also can be branded with your sponsors logo which gives them great exposure and another benefit to them supporting your club. Come along to the Cricket Club Expo events and see for yourself the 2G Flicx Pitch difference and speak to our expert advisor’s to help you decide which pitch is the right product for your club and how to install and maintain it correctly. Please click the CCE logo link above to register for your nearest CCE or contact us with any questions which you may have on the product itself or if you are after a quote.